Diyotta Manager is built on simple and yet powerful architecture to manage and monitor the Diyotta services. Diyotta Manager components are categorized into Manager, Metadata repository, Node Manager, Broker and User Interface. The following diagram depicts how these components are related and communicate with each other. 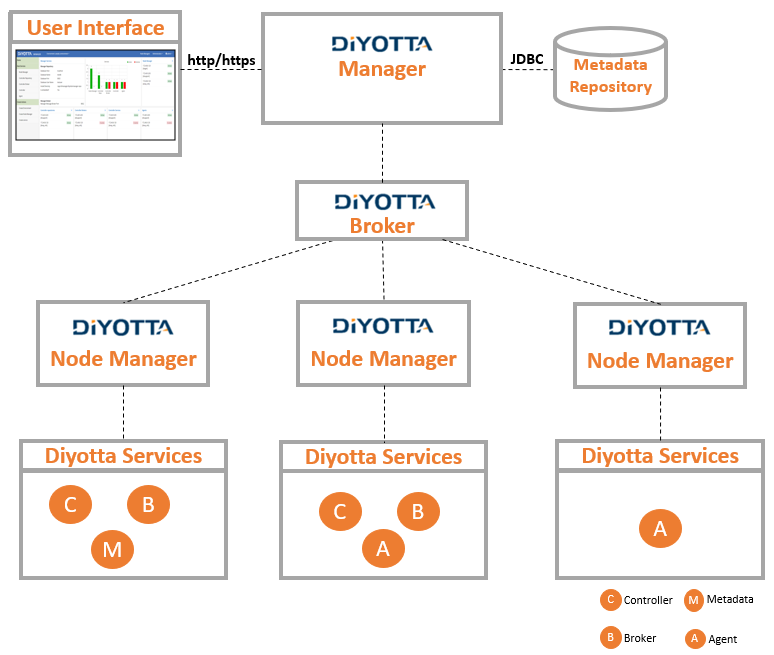 The Manager Repository is maintained in a relational database. It stores registered services data built through user interface and administration related metadata. The manager repository is hosted on PostgreSQL database. Metadata is very lightweight and provides backup and restore procedures. Any sensitive information like the database and user credentials is encrypted before storing in the metadata. As part of the Manager installation, the PostgreSQL database can be installed optionally which will then be used by the Manager as the metadata repository. Optionally, an existing PostgreSQL database can also be used as metadata repository.

The User interface is browser based (thin client) interface, requiring no separate installation. User interface can be accessed by providing URL which will normally be http://<hostname>:<startup port>. The Diyotta services are managed through this interface which can be installation, upgrade, start, and stop. The interface also provides dashboard with current status of the services registered with it.